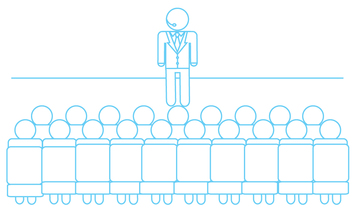 The packaging has three times more impact than the content (Holladay & Coombs,1994)
This means that even if you have a really amazing idea or expertise, if you don't deliver your content in a good way, it simply won't be received.

Scientists have been studying public speakers and what makes them charismatic (e.g. Antonakis, 2011). This resulted in 12 trainable techniques, which have been shown to improve how charismatic you're perceived.

Next to these 12 techniques, we added techniques we derived from our own extensive comedy experience (improv & stand-up comedy). After all, humor has also been shown to have an rather large influential effect on behavior (e.g. Stick et al., 2012).

Based on the charisma techniques together with the comedy techniques, we developed a framework we use to help people to give charismatic, funny keynotes. We call it Comedycation.

Have a look at our TEDx talk on this topic.